“A Design System is the single source of truth which groups all the elements that will allow the teams to design, realize, and develop a product.” Audrey Hacq

This is the first blog post in a multi-part series. Stay tuned!

With the growth of a company comes the growth of the company’s brand. This, in turn, creates the need to create a single source of truth for different visual components. Without consistent design guidelines, each customer-facing experience will look different to the point of discombobulation, which can become a particularly notorious issue as companies grow to support multiple platforms simultaneously.

Thanks to technical advancements on web and mobile, we can reuse components across different platforms. more specifically using both react and react-native, two mature and stable technologies that have been used in production by companies big and small for years. Due to the amazing work done on the react-native-web project, we can render most of the react-native components on a web-based platform today. This allows us to share the same visual components between web and mobile, drastically reducing the amount of effort required to support both platforms and keep design language homogenous between the two. While this kind of approach might sound unorthodox, or even heresy, in nature, multiple well-renowned large organizations have adopted this approach with great success, including Twitter, Expo, Major League Soccer, Flipkart, Uber, The Times, and DataCamp.

In this guide, we’re going to explore a recipe for creating a cross-platform design system using react, react-native, react-native-web, and Storybook to visualize the design system altogether using a monorepo. At the end of this guide, you will be able to create cross-platform components with a unified design language using the following set of tools:

🚀 Setting up the monorepo

First, we need to create the folder for our project along with a package.jsonfile. Let’s do this now:

We also need to modify our package.json file and add a workspace array to support yarn workspaces. The workspaces array contains the folders or folder patterns that will be treated as part of the overall application, also, the private field is a requirement to use workspaces:

This allows us to break the application down into a bunch of smaller reusable components.

Next, let’s create two folders to reflect our monorepo structure: apps and libraries. Libraries will contain our reusable components, and apps will contain our actual applications that use said components as dependencies. Like before, we can quickly create these folders using the terminal:

Alright, now that we have our initial setup in place, we can proceed to create the two main applications that will be part of this example: a create-react-app web application and an expo mobile application.

Let’s start with the React application by scaffolding it out withcreate-react-app:

Since create-react-app web applications start with a git repo by default, we're removing the .git folder. We want the principal git repository to be the root folder of our monorepo, not a repo per individual application.

Now, let’s create our react-native expo application: (Inside of apps/ )

Alright! We’re really rolling now. Next, you’ll need to do a little bit of configuration to make the two projects compatible with one another so that they can share components:

⚛️ Setting up our Expo app to work correctly with Yarn Workspaces

To get the Expo application to work correctly with yarn workspaces, we need to add expo-yarn-workspaces as a devDependency to our mobile app:

With all of that finished, we should be ready to start setting up our design system!

📕 Setting up our Design System library with Storybook 6 and Typescript

Finally, the time has come to talk about the good stuff! To start with, we’re going to create the ui folder inside of our libraries folder:

The ui folder will contain our shared react-components and will help to create a solid foundation to build our design system. Let’s go ahead and generate our package.json for the ui folder:

We also need to set up the typescript typings so that our two applications know where to find them when they install the ui package. To do this, edit the package.json file and add a typings field with the value of dist/index.d.ts. This typings file will be generated when we compile the ui package, allowing our applications to consume the type definitions and use them during their own compile steps.

To automate some of the more tedious tasks, let’s create a few scripts entries under package.json:

Now that we’ve taken care of much of the project boilerplate, it’s time to add the dependencies for our ui package:

Let’s pause to explain the dependencies listed above a little bit:

We are going to need multiple typescript config files. First, let’s create a tsconfig.base.json file with the following contents:

Now, let’s extend it with two versions, one tsconfig.json for Storybook and one tsconfig.build.json for typescript watch mode and to generate the final output.

Since we’re using this configuration for Storybook, we’re going to point our library to the index file under source; we’re also leaving the module specification as ESNext since Webpack will bundle it and we’re setting up the “noEmit” flag to true so that the Storybook process doesn't generate any output files.

This file will be responsible for generating the actual build output. We generate it under dist, using the CommonJS module specification, and include the typings as part of the output.

Next, we need to create a babel configuration file that will be automatically picked up by Storybook. This file will register a plugin that will convert the react-native components to their proper versions (either web or native).

First, create a .storybook folder and, inside of it, an empty main.js file:

Alright, now let’s create a webpack.config.js that will contain some configuration pointing react-native components to their proper react-native-web versions.

Let’s create both our docs and src folders to start working on our first components, as well as index.ts under src to serve as an entry point for exporting our components, helpers, and other tools:

Finally, let’s create our first component! Create a folder under src named components and inside of it create a file named XPButton.tsx:

Next, let’s edit XPButton.tsx and bring it all together:

This component will be a simple button.

Next, we need to export it in the root index.ts file:

Before we do anything else, due to a little versioning glitch related to Storybook 6, we need to patch our monorepo’s root package.json file (NOT the ui module’s package.json file) and add the following fields to force the correct versions to be used everywhere:

Now let’s run $ yarn so we can get our packages updated.

Great! Finally, in two separate console windows, in the root of the monorepo run:

Alternatively, you can install the concurrently dependency and merge both commands into one IE:

And run it with:

You should see the following result on the web browser: 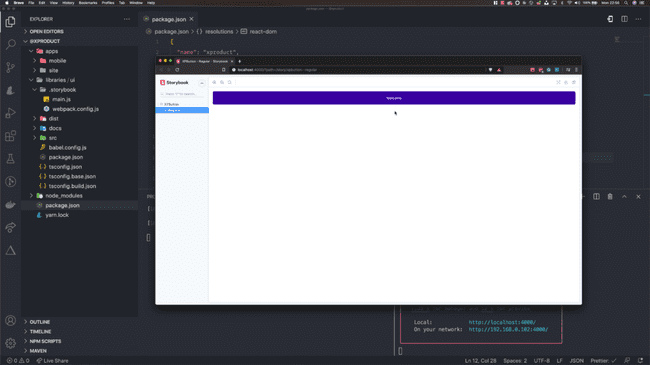 Now, you can go ahead and use the new XPButton component in the two applications by importing them: 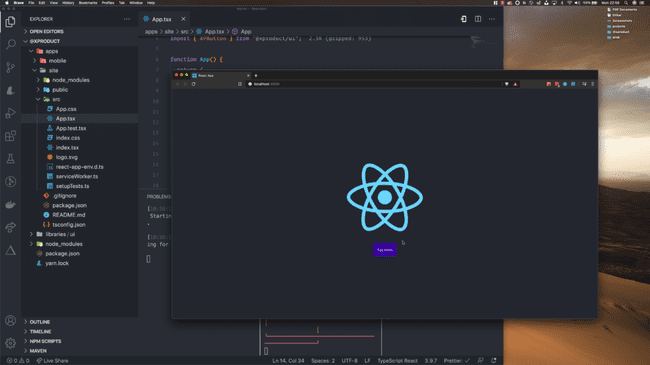 Same for the mobile app:

This is great! We already achieved Cross-Platform (Android/iOS/Web) UI code sharing with react-native-web and set up an excellent visualization/edition system with Storybook 6.

🎨 Next steps on creating a Design System

A design system should contain a color palette, typographies, and more complex components, all of those are already added on the template repository.

I recommend the pigment library because It’s beneficial to generate color palettes, schemes and combinations programmatically, it features some other goodies like contrast generation and a Flat, Hand-Picked Color Palette, features very helpful for design-systems.

In the next part of this series, we will set up a proper design system. Stay tuned!

You can check out the whole template setup here

Join our developer community and ask a BoltSource Engineer today